What is The Pack?

In The Pack you play a domestic dog in a world where the humans have inexplicably disappeared. You have gathered into a pack with other pets from around the neighborhood.

What is this game about?

What do the players do?

The players embody their characters, narrating the action and speaking for them. They rely on their playbooks to inspire behaviors and choices that reflect the type of dog they are. Because this game is GM-less, players are also responsible for introducing dramatic elements, obstacles, challenges, and stakes for the other players.

What do the characters do?

The dogs work together to survive in a world suddenly devoid of the one constant they had come to know: humanity. They navigate this brave new world, following their instincts, surviving dangers and threats, and investigating mysteries.

What does “GM-less” mean?

Every player is allowed to introduce challenges, obstacles, and stakes into the narrative. If a player’s character doesn’t appear in a particular scene, they can take on the role of the setting, inserting threats and opportunities. All players should discuss the consequences of their actions.

The Pack is a game about a group of domestic dogs who wake up one day to find all humans gone.

Aim: What are we trying to do?

As a pack of dogs, we’re trying to survive in a world without humans. It’s up to us what that means, but it likely includes overcoming threats both natural and unnaturals, building a strong infrastructure, and perhaps discovering what made the humans disappear.

Tone: How does the game feel?

Since the dogs no longer have their humans, we might be dealing with loss and grief. Because this is a post-apocalyptic setting, we might deal with issues like scarcity. The dogs will most certainly face danger. And if we decide the devastation is paranormal or otherworldly, things might get kinda creepy.

The very premise of The Pack is abandonment: the dogs have been abandoned by their owners, or so it might seem to them. The dogs’ story might also deal with betrayal, injury, or even death. If the dogs’ neighbors are antagonistic or hostile, there may be animal violence. All that said, the subject matter is largely up to the players around the table. Discuss what’s off limits with the other players before you begin. Check in frequently with them to make sure the story is safe for everyone.

In order to download this game you must purchase it at or above the minimum price of $10 USD. You will get access to the following files:

How many players does this game support? 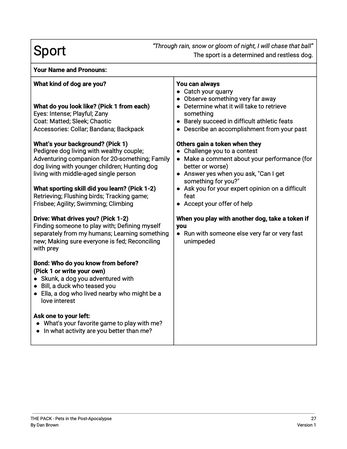 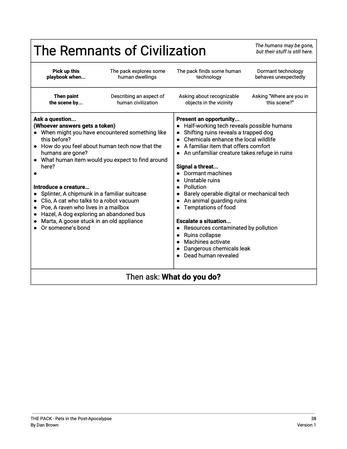 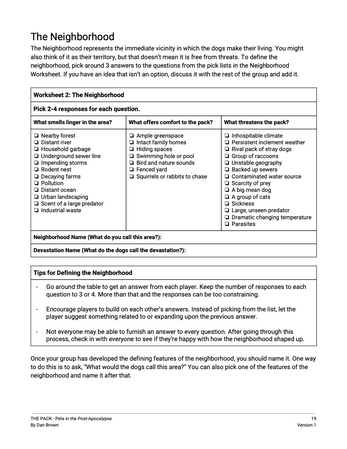 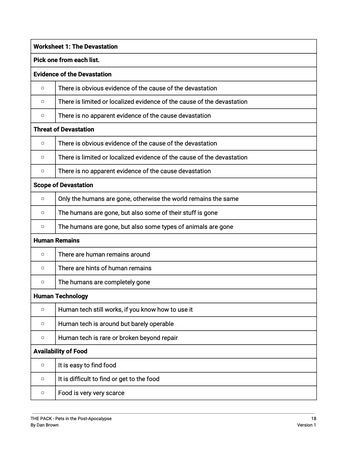