Colonizing Mars is more than an exercise of grit and technology and science. It’s politics and economics, too. It’s forming a new social, political, and economic framework in which humanity can thrive, all within a hostile environment.

In Ares Ascendant, players assume the roles of Earth’s best and brightest, the group who will establish the first Martian colony. They won’t start entirely from scratch, as their transport ship is loaded with supplies, and unmanned vessels have been dropping equipment over the last several years. Despite the head start, however, the group will be responsible for getting things ready for more colonists.

Concept: In Ares Ascendant, you play a member of the crew colonizing Mars. You are among the first to arrive and your mission is to prepare the planet for additional settlers from Earth. Though you are working with others to prepare the colony and to terraform Mars, you may have a different perspective from your crew-mates about the best approach for doing so.

Aim: As colonists, your aim is to develop the colony while adhering to the principles dictated by your politics.

Tone: Ares Ascendant strives for political intrigue combined with the gritty horror of surviving on another planet. The Martian ecosystem is hostile to humans, and it is difficult to establish a colony. While Mars itself makes the mission difficult, as is typical for humanity, we are our own worst enemy.

Subject Matter: The stories in Ares Ascendant deal with intrigue in the face of cooperation and betrayal in the face of survival. There may be violence, disaster, and political action.

Touchstones: Ares Ascendant is inspired by the Terraforming Mars board games, the Red Mars trilogy by Kim Stanley Robinson, and The Martian (book and movie) by Andy Weir.

Ares Ascendant: Faces of the Red Planet is a Playset for the PARAGON System, designed by John Harper and Sean Nittner. 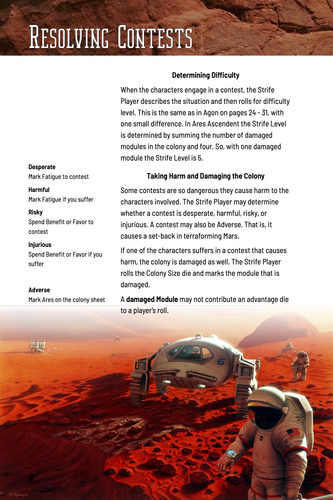 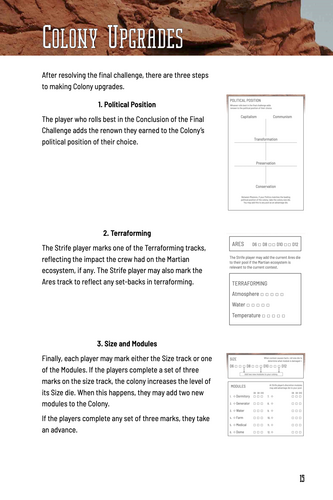